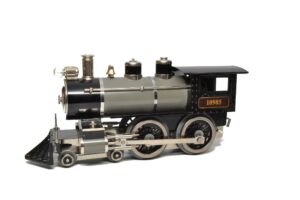 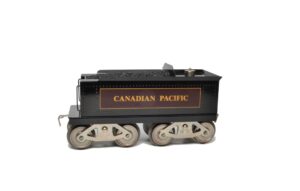 This magnificent Standard Gauge Canadian Pacific 4-4-0 steam locomotive and tender was the final piece and the crowning jewel for the McCoy Trains Standard Gauge set.  Complimenting the collection of previous McCoy Trains rolling stock, this was a very limited run of this classic steam engine wheel configuration. This made it possible for members to compile a complete Standard Gauge freight train. The locomotive will complement the CTTA Club Cars  previously released – tanker, reefer, boxcar, flatcar, log car, hopper and caboose.

This Canadian Pacific Railway steam engine was available in 1985 and 1986, painted in black, maroon and gray. Production totaled sixty-five (65) units. It should be noted that this engine was the first steam engine with a curved cab roof to be manufactured by McCoy. The engine was produced with a single road number.

This Standard Gauge locomotive comes with a matching tender in the black, maroon and gray Canadian pacific colour scheme.

Delivery to members was completed in 1986.

In 1979, the Canadian Division of the Toy Train Operating Society became concerned with the lack of Canadian railroad names being manufactured as toy trains in O, S and Standard gauges. The idea of producing a complete Canadian Standard Gauge train was brought forward. In consultation with Bob and Margaret McCoy, the idea of offering one car per year, to be sold on a pre-order basis to all TTOS members was suggested. The concept was quickly adopted and the program was begun.

The train set to be manufactured would be a 6-car consist, comprised of an Esquimalt & Nanaimo boxcar; a White Pass & Yukon Route double-dome tanker; a Quebec, North Shore & Labrador hopper; a British Columbia Railway bulkhead flatcar; a Tamiskaming & Northern Ontario Railway reefer; and a Howe Sound, Pemberton Valley and Northern Railway Co. caboose. Each of these cars on the train have a special identification marking of ‘Canadian Division TTOS’, the year of production, and a red or white maple leaf silkscreened as part of the decoration.

Leading the train would be a Canadian Pacific 4-4-0 steam locomotive, which would be produced after the 6 original cars.

A 7th car was offered as a bonus to those who had bought the train set, a Shawnigan Lake flatcar with a log load. This car a regular McCoy production item, but was included in the offering program due to its BC heritage.

All of the motorized units are sold completely finished and powered by McCoy manufactured motors, which were designed, built, assembled and tested at their factory. The McCoy motors are 6 to 24 volt AC/DC power, constructed to operate on twenty-one inch radius standard gauge track.

The Cascade Railroad’s 4-4-0 ‘Chief Seattle’, the first steam locomotive introduced into the product line, has an interesting past. This engine is modeled after the the early Lionel #6 Standard Gauge engine. However the tender is an original McCoy design.

To quote from the catalogues: ‘Here is a real classic McCoy locomotive and tender. The cab, steam chests and domes are rich Malden maroon. The boiler is a deep Galveston green with bright nickel boiler bands, bell bracket, smokestack, boiler front and drive rods. All wheels are die-cast and painted red. The drive wheels have bright nickel tires. The working headlight is die-cast and painted. No interior cab lighting. The tender is Malden maroon with Galveston green floor and skirt. Lettering and numbers are in rich gold and black decal’.

This particular style of steam engine, the 4-4-0 wheel arrangement locomotive, has been chosen by both the Train Collectors Association (TCA) and the Toy Train Operating Society (TTOS) to haul their respective Standard Gauge convention trains. With one exception, this steam locomotive has always been produced with a ‘pointed’ cab roof, thus giving the appearance of being modelled after an early steam engine, circa 1900. However, in 1985 the locomotive was built with a modified style ‘curved’ cab roof and painted in Canadian Pacific Railway maroon, gray and black. This special locomotive was produced for the TTOS’s Canadian Division train. This curved-style cab roof gives a streamlined and more modern appearance to the locomotive. The rounded roof is found on no other McCoy steam locomotive.

Although this engine was produced for the Canadian Division, it bears no other identification other than ‘Canadian pacific’ silk-screened on the tender. As with the entire division set, the club/division name is printed on each car in very small lettering. For the steam engine, it was felt that this small lettering would detract from the engine’s appearance, and was therefore left off.

Between 1957-61 McCoy Manufacturing specialized in crafting Standard gauge and 2⅞” gauge reproductions of premium Lionel train line items originally from the 1900’s-20’s. In 1966 McCoy introduced its own Standard gauge line of trains.

Editors note: used with permission  from Trains and Toy Soldiers

In the world of model trains, there are giants. Lionel and Bachman produce thousands of different models of cars, and often those models are produced in large quantities, thousands of each model. Lionel and Bachman have excellent name recognition and produce excellent products, but they are not for everyone. Some people yearn for something different and distinctive, and for those people we might suggest McCoy Trains.

Like many great ideas and great products, McCoy Manufacturing did not a follow a plan to become one most beloved and collectible model trains ever made in America, but instead responded to customer needs and became what people wanted. The intimate connection between customer and manufacture is one the hallmarks of Mc Coy Trains, and is why they are amongst the most sought after model trains for collectors today.

In the early 20th century, the world was producing wonders at an outstanding rate. In 1908, Ford brought the horse carriage or automobile to the masses with the Model T. In 1908, the Wright brothers became international superstars drawing crowds thousands when they flew in an early Paris airshow. These wonders were also in the home, the widespread introduction of electricity to people’s homes led to the widespread adoption of electric devices in the home. The electric toaster, first available in the late 1900’s, lead the way, but during this period the Lionel standard gauge electric model trains first appeared.

From 1900 to early 1930’s Lionel and others produced standard gauge, also referred to wide gauge trains, for model train lovers at the beginning of the American Century. After the early 1930’s, although Lionel was no longer manufacturing standard gauge equipment, many of collectors of standard gauge loved their trains and had no interest in changing formats. McCoy manufacturing, the maker of McCoy Trains allowed these collectors to keep their trains running by providing replacements parts.

In the middle 1960’s after spending years creating reproductions of pre-war Lionel locomotives and rolling stock, McCoy Manufacturing brought out their own line of Standard gauge model trains. Unlike the giants of model train world, each McCoy train was produced in small batches and had a distinctive flair. In many ways, they were a new evolution in model trains. Whereas, Model Trains had original sought to imitate the full size trains of the modern world, McCoy Trains were individual works of art in themselves and for themselves. Boldly violating convention, McCoy Model Trains were not trying to be more like full sized trains but instead be beautiful and complete in of themselves. Much more models of the concept or ideal of train, then the reality. McCoy model trains were what we thought of when thought about trains, how we thought they should be. Powerful yet graceful, utilitarian yet beautiful, models of a dream of train more than the reality.

Sadly, most sadly, after many years of producing these distinctive and unique pieces of American art, McCoy manufacturing ceased production in 1998. While we still regret many years later, that there will be no more new McCoy trains, we cherish the trains that remain and very proud to bring a few to you to admire and perhaps take home for yourself.

For more on McCoy Trains, check out this great page from the Train Collectors Association, Western Division: http://www.tcawestern.org/mccoy.htm